Administration of a modified-live Escherichia coli vaccine along with a live Salmonella vaccine does not appear to affect the efficacy of either, indicate the results of a recent challenge study.[1]

For the study, the researchers divided specific-pathogen-free layer type chickens into 12 groups. They gave each group of day-old birds either a live E. coli vaccine alone or the E. coli vaccine plus one of two Salmonella vaccines. Some birds were left unvaccinated to serve as controls (Table 1).

The E. coli vaccine used in the study is an 078 strain of the bacterium with the aroA gene deleted to prevent it from causing disease. One of the Salmonella vaccines used helps protect against Salmonella enteritidis (SE) and the other helps protect against S. typhimurium (ST), the researchers said of the study, which was conducted at Animal Health Service in the Netherlands and sponsored by Zoetis.

Investigators sprayed on the E. coli vaccine and orally administered the Salmonella vaccines, said Harm Geerligs, PhD, a scientist with Zoetis, and colleagues.

At 21 days of age, researchers challenged birds from each group with a virulent strain of either 078 E. coli, SE or ST, which they administered to the trachea (Table 1).

The study was blinded so researchers evaluating the results did not know which vaccine regimen the birds had received.

For the next 7 days after challenge, investigators monitored the birds challenged with E. coli for clinical signs of disease and mortality; they also examined and scored for E. coli lesions.

Researchers used one of the following methods to evaluate the birds challenged with Salmonella:

Based on lesion scores after E. coli challenge, the researchers said there was a statistically significant difference between the vaccinated and unvaccinated groups (Table 2).

Table 2. Lesion scores of chickens 21 days after vaccination with E. coli 078 and 7 days after challenge with a virulent 078 E. coli strain

In addition, the percentage of birds with SE or ST present in the liver, spleen and cecum at 7 and 14 days after challenge (Figures 1 and 2) further indicated that efficacy was not affected when the E. coli and a Salmonella vaccine were used together, they said. Percentage of birds (n = 10) with S. Enteritidis present in liver + spleen and cecum at 7 and 14 days after challenge. 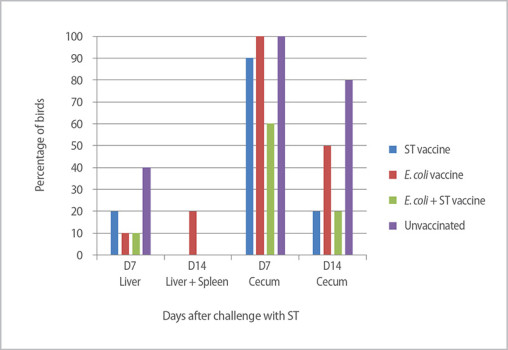